Out of a crazy idea, our first FONIA Radio Show went on air on May 4th 2012 on Radio OKJ 103.4 in Jena, Germany. The motto at that time was: “Jazz & Breaks with Foolong & Inannia”. The show at that time was based on Jazz & Breaks in the broadest sense of the word, but at the same time it was meant to open the view to closer and more distant musical styles.

The two music selectors Inannia & Foolong have known each other for a long time from the early days of the e-commerce boom. Inannia’s interest has been in ambient music since the mid 90s, in the meantime foolong has always had a good nose for jazz, hip hop and breaks. Both are fanatic vinyl collectors and since the 90s they collect, talk about and love the medium more than anything.

For the next episodes, radio shows with a stronger focus on soul, spiritual jazz, glitch & wonk and electronic were planned. The basis of the show were dj mixes live on radio with a conversation between Inannia & Foolong. In a kind of musical PingPong, dialogues were developed since then. Their beginning was planned but the exact outcome of the radio show was surprisingly open.
–
– 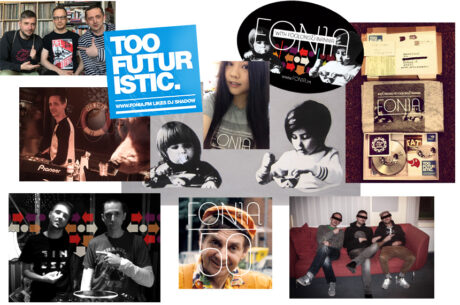 The first show with an artists

Soon both noticed that guests would loosen up the show. In summer 2012 the time had come: Ian Simmonds was the first guest at FONIA, live connected from a phone booth in Brighton/UK. In further broadcasts they invited guests either directly into the studio or an interview was done in advance via Skype. The concept is that after the interviews there is always a DJ or live set of the respective guest. Since then many local artists have visited the radio and FONIA has made contacts with artists from all over the world.
–

The general structure of a typical FONIA show consists in:
– an introductory warm up
– an interview part with the artist
– a live dj set/mix or a pre-produced mixtape provided by the artist
– radio broadcast duration takes normally two hours
–
The FONIA Radio show is always open for new music and if you are interested to join our show as artist or guest, please contact us.
–